My First Book of Great Composers by Emily Woo 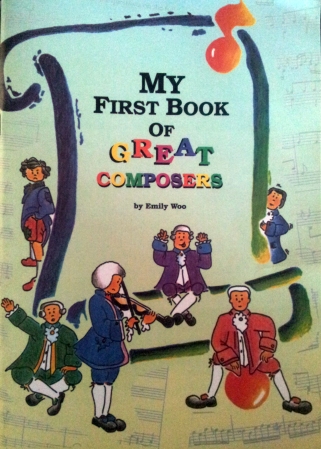 Learn About the Great Composers!
Did you know that….
Bach became famous 100 years after his death.
Haydn, the young and mischievous composer, later known as the “Papa of the Symphony”
Mozart, the incredible Child genius who started composing music at the age of five.
Beethoven became deaf but continued composing wonderful pieces of music as he could “hear the music in his head.”
Chopin is known as the “Poet of the Piano” because of the wonderful and expressive music he wrote just for the piano.
Tchaikovsky wrote some of the most famous ballet music which are still widely played today.
Find out more in “My First Book of Great Composers“!

My Second Book of Great Composers by Emily Woo

My Second Book of Great Composers gives you a chance to get to know some of the world’s best loved composers. Explore the exciting world of these great musicians and read about:

Schubert, a famous songwriter who wrote over 600 songs!
Schumann, a brilliant composer who went mad.
Debussy, who is known as the ‘Father of Impression’
Bartok, who is well known for writing Hungarian Folk songs.
Ravel, a composer who is most well known for his Concerto written specially for the left hand.

Lives of the Musicians by Kathleen Krull

Most interesting of all, what is it like to live a truly creative life? The musicians in this book, representing different countries, historical periods, and musical styles, do have things in common. About their music, they had a perseverance and single-mindedness that led not only to success, but also to eccentricities, sometimes amusing, sometimes sad.

Of all of them it could be said that their work shook up the times they lived in: It provoked riots (Stravinsky and Satie), led to death threats (Prokofiev), required police to control the crowds (Schumann), shaped entire generations of students (Boulanger), created wealthy superstars (Gilbert and Sullivan), was condemned as “addictive” and “immoral” (Joplin), and left blood on the piano keys (Gershwin). Music that we think of today as acceptable, “classic”, or even staid often caused passion and controversy during its time. “Beethoven thought that through his music he could change the world,” points out cellist Yo-Yo Ma. “Today, rock musicians are virtually the only ones who think that.”

This music can still arouse emotion – and claim listeners. It’s estimated that if Mozart were alive today, he’d be earning $20 million a year from sales of his records. The music, above all, is the reason people remember these musicians today.

Here, escorted by the patron saint of music, Saint Cecilia, are twenty lives, colourful and mysterious. These untold stories, never before collected in one volume, are offered now as a way of getting closer to the musicians – and the music.

Not Until You’ve Done Your Practice!

Now in its third edition, Not Until You’ve Done Your Practice! has been acclaimed as the first book on the planet to help young music students with the one thing none of them can escape – praticing.
The first part of the book shows how to make practicing more productive, so that your child can do in fifteen minutes what might otherwise take hours. The second part of the book is devoted to making the whole experience not only bearable but fun.
So if your child suddenly asks for a pack of cards because they want to go and “give the hard bits a hard time”, you know they have been reading this book.
As a concert pianist with a recording contract with a major international label, and as someone who learned violin for ten years and hated every second of it, Philip Johnston is uniquely placed to write a book on practicing, because he understands what it is like to avoid it. (Reliable sources say he did thirty-five minutes of violin practice altogether in those ten years, and used to over-tighten the strings until they broke to avoid lessons…)
Philip runs one of Australia’s largest music teaching studios, and is heavily book both as a presenter for seminars for teachers, students and institutions, and as performer in his own right.

An Illustrated History of Music for Young Musicians

Over the years, music in the Western world has been changing constantly and the music of today is very different from the music people made 300 years ago.
To help you understand how this music has developed, each of the book in this series will describe a different musical period. For each era, we will show you the way the people of the time lived, and the kinds of art and architecture that were typical of the period. We will discuss the important musical characteristics and describes the lives and contributions of the major composers.

Compassvale Crescent
93850375
All lessons are conducted at teacher's studio.